As we approach the 1000 subscriber mark we wanted to rearm ourselves with the ability to do high quality livestreaming right here on this channel. We used to have quite a few YouTubers coming through our studio and using our setup to stream to their channels.

I wanted to reboot this series that I started on my old channel. You haven’t seen us do it here yet but I used to run 2 weekly livestreams on that channel in 4K. I did an overview of the hardware we used. You can check that out in the top right hand corner right now. In this video Im going to cover how we livestream and encode to YouTube in 4K.

Before I begin I wanted to just make this very clear. This is for a dedicated streaming machine not for playing games and streaming on the same machine at the same time. This video is only about the encoding and streaming software. If you’re interested in a gaming machine that you can stream on drop a comment below and we will make a video about that type of setup.

Okay lets start off with the capture hardware we use to do this. We use 2 capture devices because we want the ability to be able to have a multicam setup although we only have a single 4K capture device. I dunno if that makes sense.

Our primary capture card is the Blackmagic Intensity Pro 4K. I hear lots of people speaking about 60fps and higher frame rates but to be absolutely honest. I cannot stand the look of 60fps video. For gaming its fine but for everything else it just looks unnatural.

Our secondary capture device is the Elgato HD60S. The reason why we have this is mainly so we can plug in a 2nd camera or laptop and upscale the input to 4K.

So maybe you’re wondering why we chose to stream in 4K. The short answer, its because we can. The long answer is. We want our content to stand the test of time. Me personally, I’m a strong believer in 4K.

I haven’t uploaded anything to YouTube since 2015 that wasnt in 4K and with the price of 4K TVs and monitors being super affordable the old “no one even has a 4K screen to watch it on” is no longer a thing. Get with the times. Sorry about the rant. Anyways. 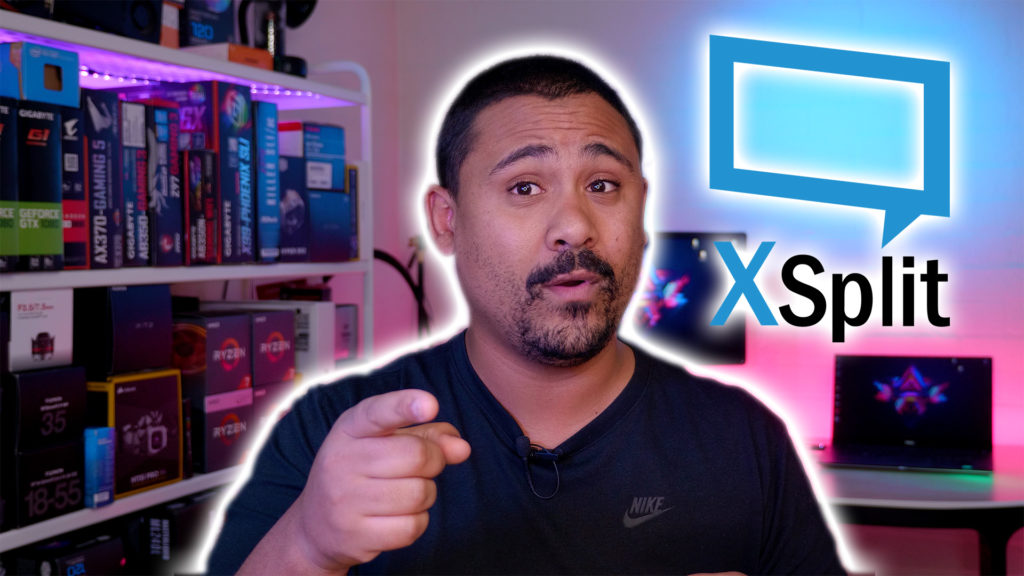 Rewinding back to resolution. 1080p has its advantages such as lower overhead and cheaper implementation but realistically if youre not thinking about 4K you really need to start seriously considering. The advantages of 4K are obvious but the overhead is massive and lead me into the next part. Encoding software.

Let me start off by saying. I don’t like OBS. The main reason why you’d really chose OBS is because its free. With that said lets talk about Xsplit. Yes we use Xsplit. It just works better and we never have problems with it. Don’t get me wrong we have used OBS for quite a few streams but after using Xsplit as well. Xsplit just works better.

Why should you pay for Xsplit. I was to start off by saying the Xsplit has not paid for any endorsements or anything were regular paying customers. If youre serious about streaming then Xsplit is a seriously good product.

Its really easy to setup your workspace. This applies to people are trying to stream in 1080p as well. You can literally add your sources click stream to YouTube or Twitch and Xsplit will determine the best settings based on the resolution you’ve chosen.

Xsplit from our experience using a fully AMD system also plays nicer. Our streaming rig uses a  Ryzen 1700 and a RX580 GPU has typically yielded better results and way lower overhead when we stream in 4K compared to our other Intel streaming rigs we tested.

Okay lets get a little more technical. I’ve had a lot of people asking about whether they should use the YouTube Live RTMP Stream keys or the YouTube Live API for streaming in 4K. I’ll make this as easy as possible to understand.

If you’re thinking about streaming in 1080p I would absolutely suggest using the YouTube Live API however from heaps of testing and trail and error if you’re wanting to stream in anything above 1080p then I would use the YouTube Live RTMP Stream Key.

Heres why. The Live API gives 1080p streams access to lower latency. This means you can reduce the stream delay to 0 seconds and make it truly realtime. This is great if you’re playing games with your viewers like Jackbox or any game that requires input from your viewers.

If you use the Live API for 4K the latency gets really out of sync really fast. Weve seen upto 2 minutes of latency for 4K streams using the Live API. If the delay isn’t an issue then use the Live API. But if you want to play games like Jackbox with your viewers then use the YouTube Live RTMP Stream keys and setup your streaming settings manually. In Xsplit is super easy to set up the manual settings which is another reason why Id recommend it.

One of the last things I wanted to touch on was once you’ve got your software setup and ready to go, whats the best way to control your stream. We use a little thing called the Elgato Streamdeck. Its super handy and you can assign each button which doubles as a screen to do basically anything you want it to do. You can set it up to switch cameras, inputs, have a soundboard basically anything you can think of, the Streamdeck will allow you to automate it for streaming. This is seriously one thing I reckon every single streamer should be using.

Lastly. Its all well and good that I’ve been talking your ear off about why streaming to YouTube in 4K is awesome but the one thing you really need to consider is your internet connection. More specifically your upload speed. Youtube requires that you have at least 13mbit upload to initiate a 4K stream to YouTube. Our regular internet connection gives us 40mbit so we added a 2nd connection to have a combined upstream of 80mbit in total.

At the end of the day we haven’t decided if were going to stream to this channel in 4K yet but the ability to be able to do it is really important to us.

ABOUT US
We are tech and camera aficionados with a penchant for discovering new gear. We'd love to review your products! You Peek, We Seek
FOLLOW US
© Designed & Developed by Gear Seekers 2018 - 2021
MORE STORIES
YouTube