Do you ever scroll through eBay searching for things that are usually really expensive then something catches your eye? A 4K Capable Projector for only $250! How is that possible?

We’re going to do the work for you and find out if a $250 eBay projector is worth the money of it you’re wasting your money on a piece of s***.

All jokes aside though. It actually has quite a bit of IO on the rear. Headphone jack, AV input. 2 USB inputs. 2 HDMI inputs. Ethernet which is actually very intertesting and VGA.

Lets talk about what you actually get for your hard earned money though. The projector outputs an impressive 3500 Lumens of brightness which in most cases is decent given how little money this projector actually costs. The projector. I’m just going to keep calling it the projector because any of the names are just too long. Anyways. 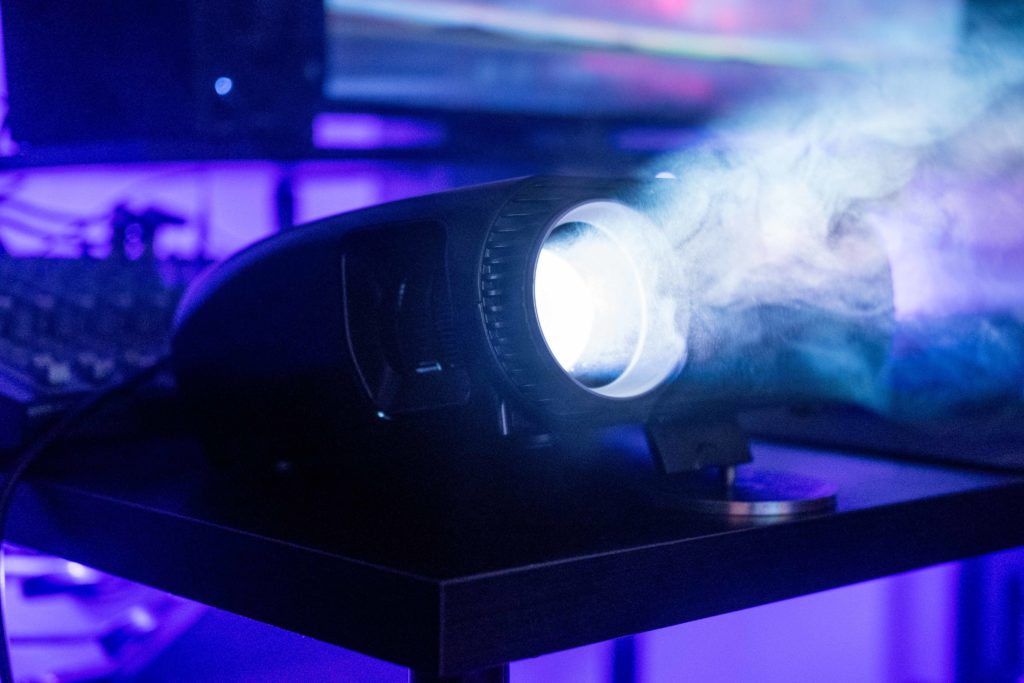 The projector can support up to a 4K input. Legitimately a 4K input. We actually tested it and it works. However the drawback is the native resolution. What you thought it was going to be true 4K for $250. You’re dreaming. The native resolution is only 1280×800 which 80 pixels higher than 720p. Ill be honest with you. Although the number on paper is quite low for today’s and in-fact 2008s standards, when it’s up on the wall it actually looks pretty good. We tested it in 1080p playing Battlefront 2 on our Ryzen gaming machine with all the settings maxed out and it looked great and it was verrrrry playable. I didn’t really notice input lag at all and found myself playing for 2hrs without even realising I was playing for that long.

That being said the only way you’d be able to tell it’s running at a lower resolution is if you get right up close and pixel peep.

On the subject of pixel peeping, one of the other things that was weird about it was how bright the image was when the brightness was turned down. Its actually not a bad thing because I was expecting this projector to actually be worse than it really is. Honestly my expectations were set pretty low. All of the things can be adjusted as well via the settings menu.

The projector has a built in keystone which has 15 degrees of adjust-ability. What does that even mean. Well if you have the projector on a slight angle pointing either upwards or downwards you can change the angle of the image on the wall. The only thing that wasn’t consistent with it was when we had it setup at a low angle and the keystone at full tilt one of the sides wasn’t in focus. I was going mad trying to figure out why as well. I straightened it and all was good in the world. I call that user error.

The projector also has a little bitty trick up its sleeve. It has Android 6 built right in. Now be aware. Although the implementation is actually quite seamless the only drawback is the speed of the experience. The CPU GPU combo they are using is sluggish at best. I’m a daily android user so that’s probably why I noticed it more than most others would. One cool feature is the implementation of the Google Play Store. You can install any android apps. Apps like Netflix, Plex, YouTube, and even Instagram and Google Chrome.

I mentioned earlier that the user guide talks about a website to visit for more information. Well in the android settings there was a super vague mention of being able to use a remote app to control the projector which for me is actually more convenient since navigating android with the included remote was probably one of the worst remote control experiences of my life. I don’t usually care with having to input things like usernames and passwords with a regular TV remote but this was worse. The input lag was basically unusable. I eventually found what app to use to remote control the projector. So if you’re thinking of picking up this projector you can just use the link below.

Speaking of connectivity it has usb and supports most file formats for video images and audio. It’s got WiFi, Bluetooth and also Ethernet as well. Let’s rewind and talk about the Bluetooth.

Like most things these days we want them to be wireless and connecting a sound output is no exception. The Bluetooth implementation is awesome. We tested it by connecting it to a Samsung sound bar and the Presonus AR12 mixer via Bluetooth and it worked flawlessly. We didn’t even bother testing using audio with it any other way because the Bluetooth was that good.

I know you’re all waiting for this bit. Why is so cheap. How can they make it cost only $250. Well its because its fucking loud and the internal speaker sounds like shit. Alright let me explain. The internal speaker just sounds metallic and well lifeless. It would probably sound a little better if you could actually hear it over the sounds of the whizzing jet engine that ignites every time you turn it on. Seriously its loud. Have a listen for yourself.

Okay so for $250 is it worth it? I think if you’re looking for a projector for a secondary type of display and not your main home theater setup its $250 well spent. But if you have room to setup up this as your primary home theater setup let us know how you go. If you search eBay you will find projectors for half the price half the brightness and literally half the resolution that may well be pretty good but to be honest I didn’t want to take a chance on them given how the relative brightness would have been. Does that make sense? Also although the projectors output is quite bright you’ll probably need to close the blinds. Its actually pretty forgiving with ambient light so don’ be too concerned.

In conclusion. Its cheap, not nasty and performs a bit better than you’d expect a $250 projector to perform. Aside from the fact that there is an F16 fighter jet engine inside.