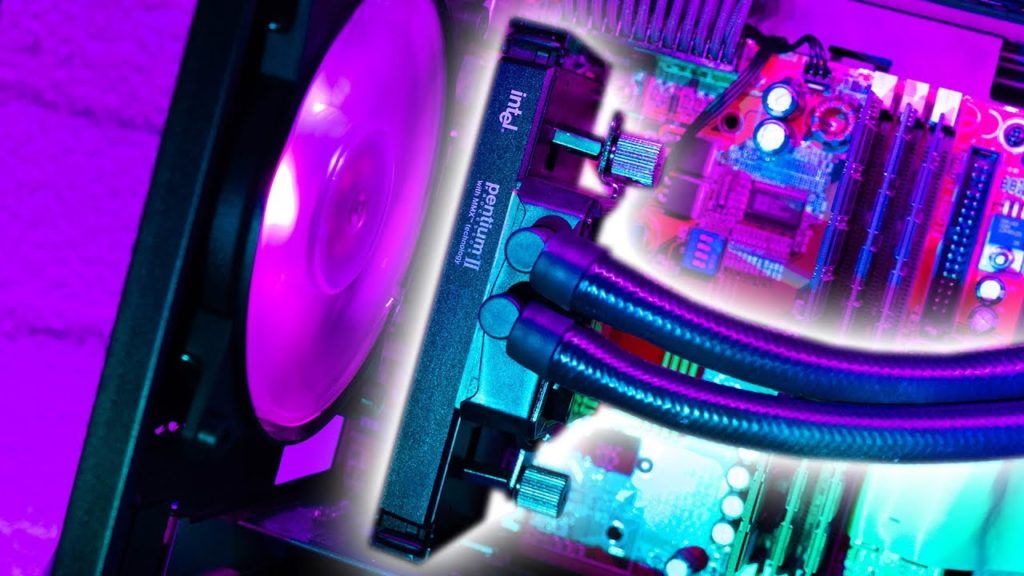 I wanted to build a, lets call it retro gaming PC but with a modern twist. I think they call that Modern Vintage Gaming. I wanted to base it on a platform that could play basically anything from around 1990 to 2002 but the caveat was it had to be in a case with RGB, tempered glass and have water cooling of some some sort to take it from 1998 to 2018. I can already hear the purists furiously beating away at their keyboards.

Sourcing parts for this build proved to be pretty challenging because the price of parts are getting a bit excessive. I put the word out in around April to ask if anyone wanted to donate some old stuff to the cause because I wanted to initially do this for a 1000 subscriber video but 4000 subscribers later, here we are.

Around 2 weeks ago my friend Elias company was getting rid of some e-waste and before they dumped the whole lot in a landfill he plucked 5 systems from the lot and gave them to me. 2 of the systems were socket 7 based with some Pentium 200 MMXs 1 was a dual socket 604 Xeon. Another was a Pentium 4 based system and the final one was a Pentium 2 based system.

I couldn’t believe my luck. A Pentium 2 based system was exactly what I was looking for. Most Pentium 2 boards are ATX which means you can use a pretty modern power supply and the mounting holes should line up with basically any modern case. The hardware that I got ended up working perfectly and I harvested some of the other systems for memory and hard drives.

I didn’t have a decent video card or sound card so the next mission was to chose something I knew would work with Windows 98 Second Edition. I did some quick eBay judo and picked up a Sound Blaster Live 5.1 and a MSI NVIDIA Geforce 2 MX400.

I ran into an issue though, in my hasty buying I forgot that the board I had was only 2x AGP and Id just bought a 4x AGP card. The slots are basically the same but the voltages are different.  Luckily for me though the Geforce 2 MX400 I picked up runs at 2x AGP. I honestly forgot that that would be an issue but I got lucky. This is kinda where I started remembering how it was back then. That’s kinda the plot of this story, but ill get into that later.

I had the platform set, the operating system chosen and all of the additional hardware sorted the next thing was to figure out if it was possible to water cool the Pentium 2 350.

The stock heatsink is mounted kinda the same way. There is thermal paste between the the Chip, the IHS and the H60. The Stock Pentium 2 cooling system is also designed this way too.

I’ve got my Platform that could play anything from around 1990 to 2002 and the system having to be water cooled. The last choice was the case and RGB.

Thermaltake sent us the brand new V200 TG RGB with a built in power supply. It is the perfect case and power supply for a build like this, so I used it. It has built in RGB and comes with 3 RGB fans. Now that we have all the parts and all the requirements sorted it was time to build. Lets do it.

Right so you probably noticed that the build portion was short. Thats because there isnt much to the system. It used a 120GB IDE HDD and everything was copied and transferred over the network. I didnt need optical drives or floppy drives to be in the system, however I did use a CDROM drive to copy drivers and files before we got it hooked up to the network.

The system plays everything I wanted it to play from Jazz Jackrabbit, Doom and Commander Keen to Quake 1 2 and 3, Unreal Tournament and Rise Of The Triad.

The performance is awesome and its whisper quiet. The CPU runs ridiculously cool and there is no question about whether or not the AIO conversion was worth it because it was. The stock cooler had seen better days and it was loud and hot. No I didn’t bother bench-marking it because who cares. It does what I want it to and its based on a 20 year old platform.

Building this system made me realise something though. It made me realise how good we have it with computers now. We put in a USB stick to install the OS really easily. Plug Ethernet in and most of the drivers will be downloaded for you. There is no real challenge to building and setting up your computer these days. Its too easy. That’s not a bad thing though.

What I really enjoyed about this process was getting everything running and having that nostalgic moment when I remembered that its easier to have your entire windows 98 cd on your hard drive because every time you install a driver it wants you to use it or the fact that windows 98 will ask you to reboot your system when you do just about anything. I loved that it was a challenge. But not a challenge in the sense of it being hard but more in the way of me having to remember how everything was done back then.

It really makes me appreciate just how easy everything is now. This system is going to stay together and I’m going to give it a permanent home in my office for retro gaming. Sure I could just use DOSBOX or a virtual machine but its just not the same as booting up into Windows 98 and hearing that startup sound.

Corsair 4000D Airflow: You Asked For This Build