It’s time for Aprils Franken PC build but we thought we’d so something a little different this month. We wanted to really up the Jank levels by doing something pretty stupid. We thought that wed convert a pre-built office computer into a capable gaming machine. WAIT THAT DOESN’T SOUND janky. AHHHH WAIT. Instead of putting the GPU on the inside we put it on the outside.

Let’s answer the question every kid on the internet is asking right now. Will it run Fortnite? Lets find out! 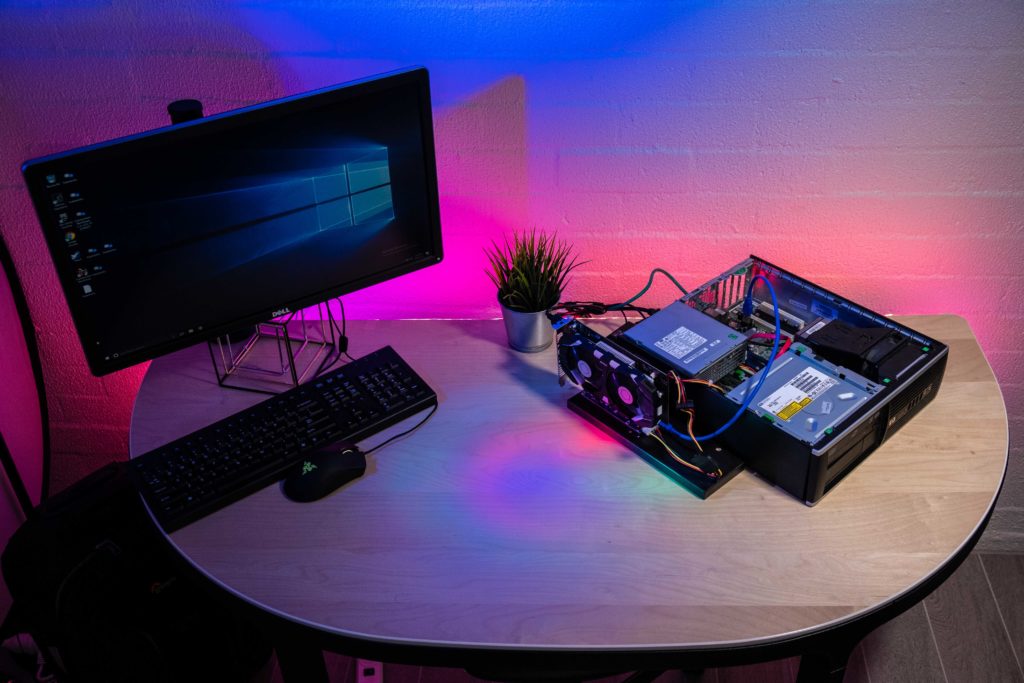 This months Franken PC is based on a HP Compaq Elite 8100 that I’ve had for around 2 years that was given to me by a friend, however ours is a little bit different from the original spec. The Elite 8100 originally shipped with a first gen socket 1156 Intel core i5 650 with 2GB DDR3 RAM and on=board graphics.

I had a spare first gen Core i7 860 and i dropped that in sometime last year. I lost the original ram modules somewhere so I put i a single 4GB Patriot DDR3 stick I had laying around.

Right so there are a few reasons why were going this. Firstly the power supply is proprietary and has no PCIe power so we cant use just any GPU. Secondly you can only fit low profile GPUs in it and the only low profile GPU I have doesn’t work anymore. Finally, we don’t need this PC for anything, so if it breaks in the name of science it will be worth it. Plus the jankier the better. It is a Franken PC after all.

With all that in mind, I asked myself? Whats the most powerful GPU we currently have that doesnt require PCIe power and performs really well. I know The 4GB MSI NVIDIA GTX 1050ti.

We used a x1 to x16 PCIe riser typically used for crypto mining and drilled it into a bit of wood for maximum jank. Yes im aware it doesnt allow the card to run at x16 but who cares. I wanted to see it it would work at all. Yeah I could have used a PCIe riser cable that I had but thats just not janky enough. Remember its in the name of science after all. Let’s see how it runs.

Can it play games? Yeah kinda. I mean Fornite at 1080p on auto settings is playable but its not ground-breakingly fast. But that’s not the point of a Franken PC. We wanted to see if we could convert an office computer into a capable gaming computer. I think we achieved it. Kinda. It does stutter randomly. But it works. Even if its only running the GPU at x1. It plays Fortnite and that’s a game so I guess its possible.

Would I recommend permanently using a computer like this. Probably not. The amount of times my fingers almost got chopped off by the GPU’s fans was scary. Not only that the random stutters with running the card at x1 is noticeable even if it is only random. We built this for a bit of fun. We hope you enjoyed this months very odd Franken PC.

If you want to donate parts we have our postal address in the description where you can send anything you like.