Last time we looked at a monitor here on the channel I felt like i had stepped into a world of buzzwords, numbers and things that just didn’t make sense to regular people. I’m all for reading up and watching videos about stats and specs but what does all of that even mean. 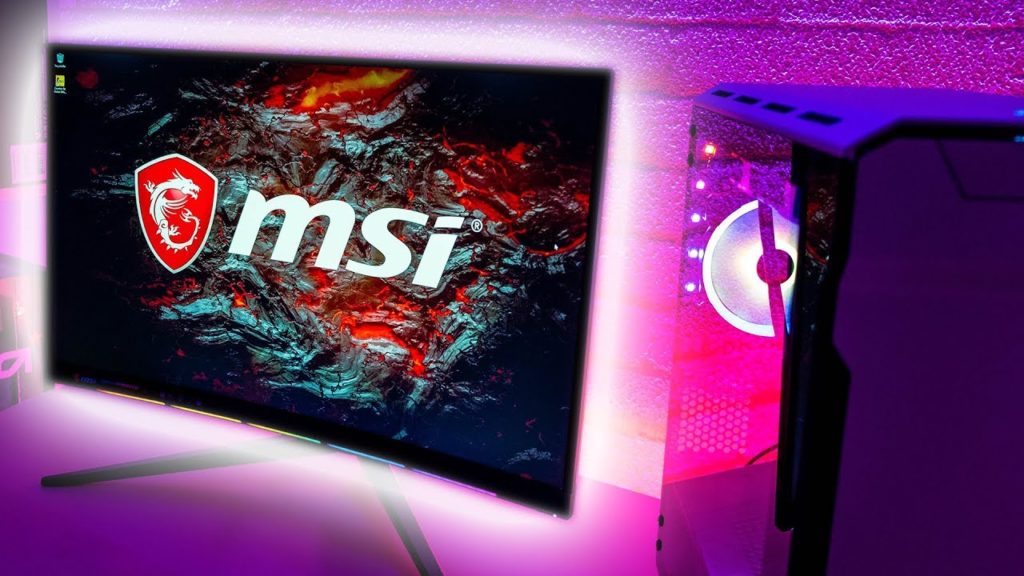 In this video were going to take a look at the MSI Optix MPG27CQ Curved Gaming monitor, yes I am specifying this from the start. It is a gaming monitor. Im going to try and help you understand what all of those buzzwords, numbers and things that dont make sense to you actually mean. Hopefully.

Lets start off with the numbers and stats for those people who are that way inclined. The spec sheet reads a little something like this. It features a 27inch VA panel with a resolution of 2560×1440 with a peak brightness of 400 nits. Its a curved display with a 1800R curve. It features AMDs Freesync adaptive sync technology with a response time of 1ms. It supports 115 percent of the sRGB color space as well as a 178 degree wide viewing angle. Its got 2 HDMI 2.0 ports as well a DisplayPort 1.2 port and 3 USB 3.1 ports for all of the things. There are no speakers but it does have jacks for your headphones and microphone and has it RGB. Wait what it has RGB.

That’s right it has RGB. Well not in the way that you might be thinking. One of the first things youll notice when you power the monitor up for the first time is the RGB strip along the bottom of the display. There is also 23 LEDs on the back side of the screen but we will talk about that a bit later. The RGB is not just there for aesthetics either. Youll notice that the leds strip is split into 5 distinct groups. These can be manipulated and changed with the Steelseries engine 3 software.

Cool so you can change the pretty colours with the included software. No Its not just for changing the colours. Its actually a visualisation tool. You’ve probably seen keyboards with displays in them to show you things like how many kills you’ve got, gun cool down or how much health you got. Its pretty annoying having to look down at your keyboard for that stuff, well you’re in luck.

The LED strips can be assigned to show things like your health in game, how many kills or your gun cool down. That is provided that the game you’re playing is supported.

If that’s not your jam then you can use the lights for things like visualising your music or ambient lighting or you can even turn if off.

Like I mentioned a little bit earlier as well there is rear lighting on the monitor as well but for me personally its not a selling point, but it is very cool.

Okay its so RGB but what does it offer to gamers, because like I mentioned at the start, IT IS A GAMING MONITOR.

Lets just get this out of the way, because its a gaming monitor you cant expect it to have the most accurate colors, that’s not the point of this monitor. I swear I see so many reviews of monitors with reviewers talking about colour accuracy and gamuts on gaming displays but half of those guys wouldn’t be able to tell the difference unless they physically read a spec sheet.

It features a resolution of 1440p which sits between full HD and 4k. If you’re coming from 1080p its a huge bump in fidelity and its immediately noticeable. Just be aware though if you’re wanting to push some serious pixels with this display you will need a GPU that can push those pixels.

I’ve talked about adaptive sync in a lot of depth before and said my bit about it already. If the display is in your budget and does what you want the adaptive sync technology shouldn’t matter too much. You can use VSync with an NVIDIA card with this display and even-though it might introduce a tiny bit of input lag, it isn’t noticeable and anyone who says it is, is either a robot of they’re lying.

Okay lets address something I talked about in the last ask nick video. Curved displays. At first I wasn’t sure how I felt about 16 by 9 curved displays since I daily drive a 21 by 9 curved display but after spending some serious screen time with this display I can honestly say that I forgot it was curved and to me personally, I didn’t hate it. In fact I would probably go as far as saying that I prefer it over a flat screen in the 16 by 9 aspect ratio as well.

The built in little joystick on the back of the screen for the menu system is really easy to use and everything is very easy to understand in the menu system. I like that that a lot, so bonus points for that.

The build quality of the monitor itself is really good and has that immediate gamer feel and there is nothing wrong with that. Its a very premium looking gunmetal grey colour with little red accents on the stand.

Its got that zero bezel design as well which not only gives it that premium feel but also looks really nice on any desk setup. The stand is fully height, swivel and tilt adjustable so you can put it anywhere on your desk at any height you want and see it.

To be very honest, there isn’t much to dislike about the Optix MPG27CQ. I think that MSI has done a great job with this display and to think not that long ago MSI didn’t even make monitors. This is a serious bit of kit and I really liked.

There is 1 thing that stands out to me that I don’t like and that’s the lack of game support for the RGB on the monitor but that’s more about SteelSeries not MSI. I have a feeling it will be something that becomes more popular over time. It may seem gimmicky to some but I see it having a lot of potential.

MSI might not be the first brand to come to mind when you think of monitors, but then again, Apple wasn’t a brand that came to mind when you thought about phones either. And that’s what makes me excited for a product like the Optix MPG27CQ, Its something that I wasn’t expecting from MSI that has the potential to be a game changer. See what I did there.

You’re probably wondering how much all of this costs well at the time of filming they are going for around 450 USD. Now that might seem like a lot of money but you really are getting a lot for your money. That’s why were awarding the MSI Optix MPG27CQ the Gear Seekers Gear of Approval for best all-round gaming display under 500USD.

If you’re interested in grabbing on of these monitors there is a link in the description.  Like I just mentioned right now on Amazon at the time of filming they are going for around 450 USD.